Here are a few videos I have enjoyed lately.

The first three were the products of the college ministry I am involved with.

Patch Slone is a film noir trilogy of 5-7 minutes shorts by Matt Pye. Its purpose ostensibly was to promote the spring retreat, but its artistic value far outpaced its informational value (which, was considerable in its own right). Matt used some archived music that got it kicked off YouTube…but he made a trailer that captures the spirit of it. 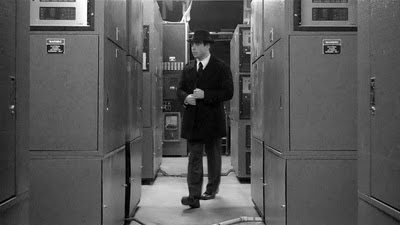 He also shot a bunch of ‘DVD extras’ which are collected here.

Last Friday they put on a concert they called ‘The Rock Band Project.’ There was a photographer there that documented the event with exceptional artistry (link here). Five bands playing a broad range of genres (from acoustic to screamo) put on a high quality two hours of music. One of the acts has made its way to the internet.[1]

Months before I preached on Acts 20, I knew that I wanted to play the clip ‘guy love’ from the Scrubs musical episode. Acts 20 has a great passage of that demonstrates substantial intimacy in male friendship (‘bromance’, if you will). I really like the Scrubs clip because it plays with the social complexities of heterosexual male intimacy in our culture.

But then I had a brain storm. Our lead musician is a HUGE Scrubs fan and has several very close friendships with men who can also sing. I asked him if he wanted to perform it live.[2] To say he was excited to help would be an enormous understatement. (Note: The video is only a couple minutes long, there are a few minutes of dead space at the end of it.)

Finally, a I have a cyber-friend (an actual friend of my brother) who is putting together a series of comedic shorts about an executive, an independent mascot contractor and a box store computer tech who commute together. It looks very promising. Here is a teaser.

"You can't use the Mars Volta...That's like bringing Goku to a Pokemon Match."

Moving from clips by people I know to a couple I just plain enjoyed:

I have kept no secret on this blog that I am a huge Joss fan…Buffy in particular. But, I thought Twilight might have been the worst ‘film’[3] I have seen in five years. So, I unsurprisingly LOVED this.

"You know what I feel? Bored."

It is clever cutting, but mostly it gets at why one vampire narrative worked and the other didn't. Buffy embraced its niche as ironic metaphor. Twilight tries to pull off earnest. Sorry, earnest and sparkly vampires is not a promising combination.

Then there was this:

I really have noting to add to this one.[4]

____
[1] Note: the sound live was excellent…it is diminished a bit by the video.
[2] Matt Pye also filmed this. He has become my go-to guy for footage.
[3] I shudder to use that term.
[4] While I’m recommending sports related hilarity, I really enjoyed this band wagon guide to the Buffalo Sabres. If you don’t have a horse in the NHL playoffs, she is here to help.

I try to be open-minded. IO try to be accepting of all musical walks of life. But all I can think of is listening to a young aquaintence years ago talking very earnestly about screamo without even a hint of irony. "it's, like, more hardcore emo. Sometimes they scream. so, you know, scream emo. screamo."

This is not to impune the genre,though I've always held that at some point, you've sub-genre'd enough. You can only break down a genre to so many levels before your divisions are sides of the same street. Does the sub-sub-genre emo ,really need its own sub-genres?)

To me it fits very well with the Buffy/Sparklyboy comparison. If screamo were a vamp, it would be dripping in glitter, but earnest young teens would still be remarkably earnest about it.

The Buffy video really is tied into the zeitgeist. It was oddly emotionally satisfying.

For some reason, I can't help picturing a similar mash-up with Office Space, culminating with Edward standing in for the copier in the penultimate beat down scene.

While I appreciate your consternation about screamo...the truth is, I can not stomach hardcore and am not that into emo...but somehow, you put them together (in a style that maintains their distinction rather than trying to find a common ground that isn't there) and it is enormously successful. They are the two great angsty genres of our generation (or maybe not our generation, but we can pretend because the music of our generation blows) but each is far too pretentious to take seriously. Somehow, when you throw them together in a great post-modern mix (using post-modern in its original, strict, sense of art that has multiple stylistic inspirations) I love it. So, while the irony of the moniker is half the fun, I brandish it proudly.

Do I have to remind you that you spent a recent bachelor week experimenting with bacon and chocolate mixtures (though, to your credit, you did not try to name the effort)?

Also, I just realized that two of the videos I posted included the line:

My comment was less to the value of the sub sub sub sub genre, but to its name:) Especially since there are some fine bands (still not sold on Thursday, but, no accounting for taste..) who get placed under that label.

I just have a hard time saying it without giggling. And a 34 year old man really should refrain from giggling. It's unseemly.

But you're right, hybrids can be awesome. I just wish we could stop having to find labels for each sub genre and instead think of it as natural variation of a broader genre. I don't know whether that reflects an increasing need by society to categorize/specialize, or a comment on the homogeneity expected of musical genres (such that any variation from the lather, rinse, repeat formulas must qualify as its own genre.)

That being said, you haven't listened to screamo until you've done it whilst eating chocolate covered bacon. (Or, perhaps "chocobaco?")

I trying to decide which video I enjoyed the most. Buffy/Edward is priceless. I am blown away by the retreat video. I want to live in Davis and know that people you know.