In the years before Hulu Amanda and I consumed visual media almost entirely through DVD’s.  This meant that my exposure to commercials was limited to my occasional trips to sports bars to watch the Badgers, Sox, Kings, Sabers or Dolphins.[1]  So for years I had a very skewed sample of the kind of 30 second spots that the industry was generating.  Let’s just say, I’ve seen more than my share of beer ads.  And it became clear, pretty quickly, that if you are marketing alcohol, and the appropriate unit of measure for cleavage content in your commercial isn’t meters,[2] you’re just not trying.
As ‘they’ say, sex sells.  And it turns out ‘they’ are right.  A spate of new (and sometimes disturbing[3]) research demonstrates that association of mundane objects with sexual arousal induces the same arousing brain chemicals (and reduces willpower) when the mundane objects are introduced in a sexually innocuous setting.
Bottom line.  Sexual marketing is effective.  Which is what made this commercial[4] so striking:

http://www.youtube.com/watch?v=1ZVWdOD9AZ0&feature=relmfu
The most striking thing about this ad is what it lacks: Women.  There is a single brief exchange with a woman.[5]  The alcohol in question is not offered as some sort of sexual elixir, but as a catalysts of friendship.  It makes me wonder….As our culture grows more alienated and alienating[6]…is there something that men want more than sex?  Is there a desire that marketers are tapping into that is more powerful than our procreative impulses?
I think the answer is yes.  I think you could argue that substantial community and authentic friendship are the more fundamental (or at least the more neglected) human need.  In his recent survey on the science of human flourishing[7], David Brooks cited a study which concluded that “joining a group that meets even just once a month produces the same happiness gain as doubling your income."  The sexualization of our culture and our obsession with romantic narratives[8] has led to a glaring lack in our platonic connectedness, and has left us poorer for it.  The Christian narrative could have told us this was how that would play out.  But in lieu of listening to ancient wisdom, a whisky commercial tells the same story.
__________________
[1] One of the advantages to growing up hundreds of miles from the closest pro or D1 sports team is flexible loyalties.  I was not tied to childhood choices by the laws of sports bigamy.  In some cases (Red Sox, Dolphins) I kept my childhood teams chosen for childhood (enjoyment of mascots) and adolescent (contrarian annoyance with Yankee and Bills fans growing up in upstate NY) reasons.  In other cases, I was free to take on the teams of the various towns I lived in (Madison, Buffalo, and Sacramento).
[2] Or yards if you must…but, really?
[3] In Predictably Irrational Dan Aierly describes a study (that he needed to get European sponsorship for because US funding sources were not comfortable with it) that involved…let’s just say, providing the male subjects with ‘special,’ protected, laptops that were not vulnerable to damage from stray…‘fluids.’
[4] Which turns out to be a trailer for a short film, but I didn’t catch that from my first couple viewings, so I am treating it as stand alone content.
[5] That could be described as warm or even respectful
[6] Mainly because entertainment has become increasingly refined and individualized…but the workplace is also moving in those directions.
[7] The Social Animal, I used this quote a couple years ago when it showed up in his NY Times column and used it again in a recent talk.
[8]I also think that focusing our romantic narratives on sexuality and ‘falling in love’ (or a peculiar 18 month dopamine surge at the beginning of relationships) has exacerbated this…because many marriages are not built on substantial friendships.
1 comment:

So, I went to Bangkok.  I worked pretty hard while I was there so it didn’t warrant its own travel blog (computer modeling in a hotel makes for pretty dull posts), but I did do enough interesting stuff to get a post together as part of my cities series:
Bangkok was a much more cosmopolitan city than I expected …more along the lines of Singapore and the Pacific Rim cities than a ‘developing world’ urban center.  I really liked it.
City
One of my favorite parts of Bangkok was my morning runs.  I generally enjoy exploring new cities while I try to reclaim some semblance of a jogging pace.  My hotel was near one of the main parks and it was pretty amazing. 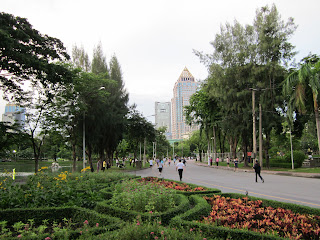 At 6am the park was full of runners, bikers, walkers and, especially, citizens of the older variety clustered in color coordinated callisthenic groups (some of the Thai Chi-ish variety, others more along the lines of sweating to the oldies). 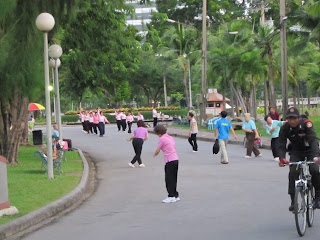 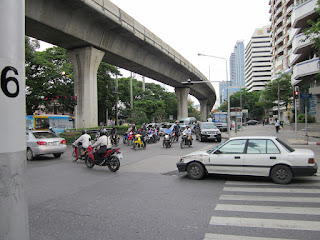 Traffic and the Elevated Train 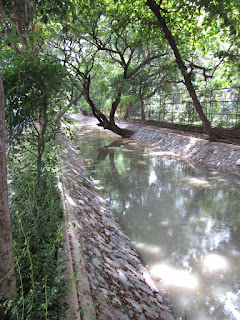 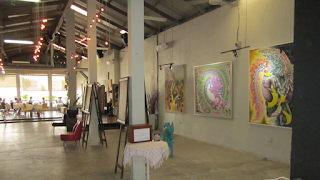 We happened on a kind of Bohemian arts district totally by accident one day, which I loved.  It centered around this art gallery which specialized in contemporary artists that worked with traditional iconography.
Temples

The way our meeting and teaching[1] played out, we had one free day in Bangkok.  So we did the standard tourist thing exploring the city center and taking the water taxis to the main historical sites along the river.  These are mainly Buddhist temples.  But, despite knowing quite a bit about Buddhism of the Tibetan variety, I am still pretty ignorant about South East Asian varieties which are deeply influenced by ambient Hindu an local belief systems and arts.[2]  But the arts and architecture are certainly distinctive and colorful.[3] 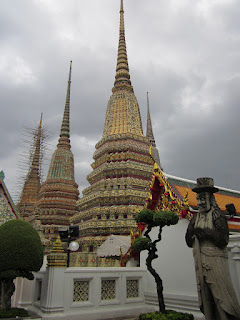 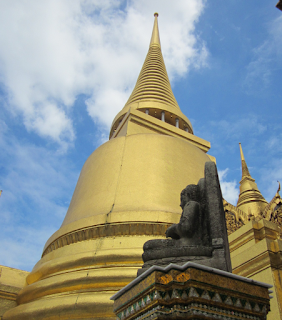 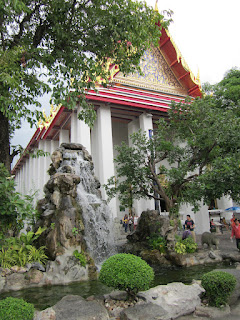 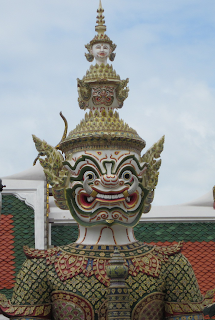 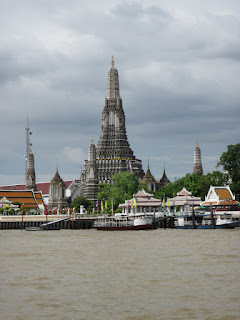 Food
Of course one of the highlights of Bangkok was the food.   Our schedule meant we ate a good deal of mall Chinese/Japanese food which was quick and allowed us to get back and work in the evening (but was WAY better than that sounds – the malls were enormous and the ‘food courts’ restaurants were nice and, according to our guides, pretty authentic).  But I got to do a fair bit of food adventure: 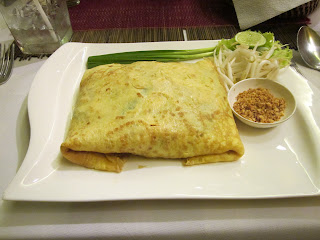 Someone wrapped my pad thai in egg!?! 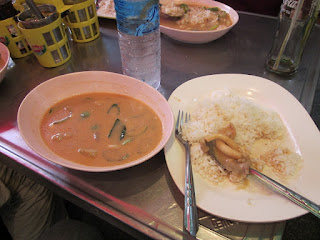 Bangkok is known for its ‘street side’ food.  We got this curry for ~$1.  It was amazing.  Also, I totally aprove of the diverse and copious use of mushrooms. 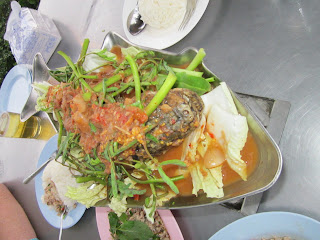 Well hello there delicious Silurforme.﻿
Friends
But the highlight of Bangkok was that I had a friend in town. My college friend Tim has been the classic globe trotter (living in Indiana, NYC, Dubai and Bangkok) in the last 8 years or so. It had probably been over a decade since I had seen Tim and probably 15 years since we had spent significant time together. It was a blast to see him. He and his girlfriend Mae were outstanding local guides. 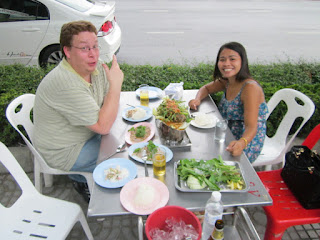 It is hard to separate this section from the previous because Time and Mae were responsible for the most fun food experiences of the week (see the shy catfish above) taking me to a Lao restaurant, introducing me to the ‘low brow’ local beer (which, to be fair, I enjoyed) and to Thai barbeque. 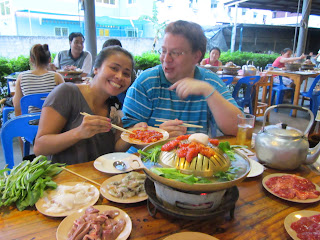 Thai BBQ - and my hosts.

Now Thai bbq needs a bit of explanation. They brought out a circle of coals and put a brass dome over it with a slab of pork fat to lubricate it (which we decided our friend Brian would call ‘pork butter’). Then a variety of marinated meats were applied to said scalding brass dome and cooked…the juices accumulating in a trench where it cooked seafood and turned magically into a delicious soup.


After the dinners they took me to a wet market[4] and to a ‘dance club.’ Now I admit being skeptical about heading to a dance club because, you see, I don’t really dance.[5] But I was pretty sure Tim shared my feelings about dancing, so I wasn’t too concerned. It turns out that a Dance Club is somewhere that you go to watch people dance while others sing pop songs. Apparently this is what most people do for fun in the smaller towns outside Bangkok, so it attracts more of a ‘rural’ crowd. Kind of like a line dancing or country bar. 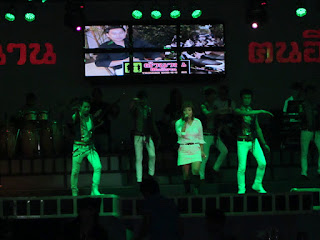 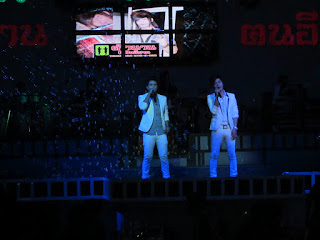 [1] One of the reasons that this is just a post instead of a whole journal is that I can’t really write that much about the work…which was really interesting and dominated my time there.

[2] My goal is to have a better understanding of this system before I go to Cambodia (and, hopefully, Ankor Wat) in August.

[3] If not exactly ancient. These sites are about 200 years old. So there is a little ‘colonial’ influence though Thailand was never colonized (which is a really interesting story in its own right, and, I think, a substantial source of national pride).

[4] Which was one of the highlights, but I didn’t take any pictures. I always feel weird taking pictures of people’s ‘real lives’. Taking a picture suggests that something is eccentric or extra ordinary. One of the things I really liked about the wet market (besides the general carnage) was the insight into local fish diversity.

[5] Rhythmic recreational body movement has always puzzled me as a cultural artifact.

Note: I officially went 0 for June posting here.  I haven't given up the blog.  I keep accumulating draft posts and will unleash a stream of completion soon. But we have been in the midst of a bit of a personal crisis here that is dominating most of my evenings (and, honestly, most of our mental energy), so it may not happen immediately.