A Summary of a Summary: James Smith on Charles Taylor...in charts and memes

James Smith[1] summarized Charles Taylor’s[2] A Secular Age, distilling a 900 page tome into a thin, accessible ~140 page volume...and also readable (Smith is a phenomenal writer with playful sensibilities who shares my love of 'cross-pressured' fiction).  He called it How (Not) to be secular: Reading Charles Taylor.

It is a wonderful little book, that took me longer to read than most books three times its length, as I tried to inculcate the language and ideas.  According to my custom, I tried to capture the more complex or helpful ideas into images.

Here is Taylor's historical story of how we got to this cultural moment that could have been otherwise. 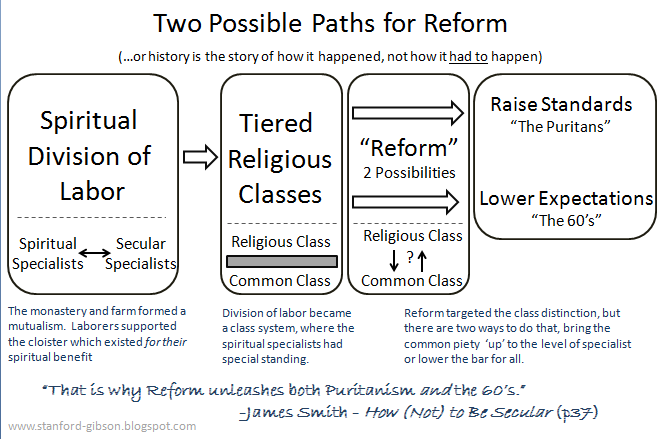 Smith/Taylor's emphasis on the non-inevitability of secularism reminded me of analogy in Gould's evolutionary narrative: 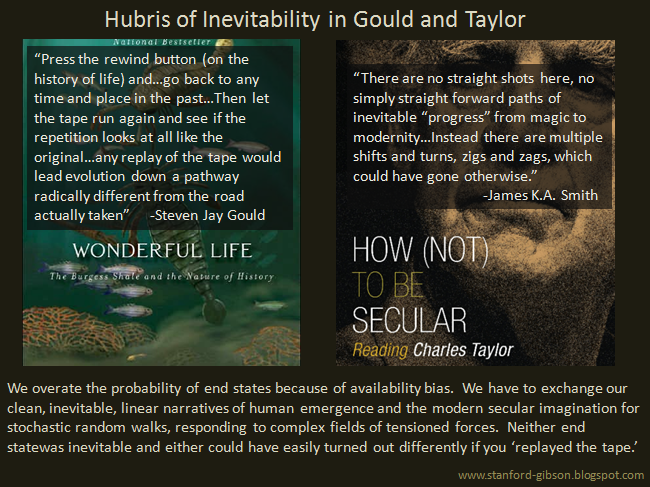 And their assertion that secularization cannot be accounted for with the standard 'subtraction stories' but requires 'additions of meaning' to get to the current synthesis, 'inventing' 'art' as an end rather than a means, reminded me of this year's complicated Pulitzer (You'll have to wait until next weeks year end fiction summary for my take on the novel). 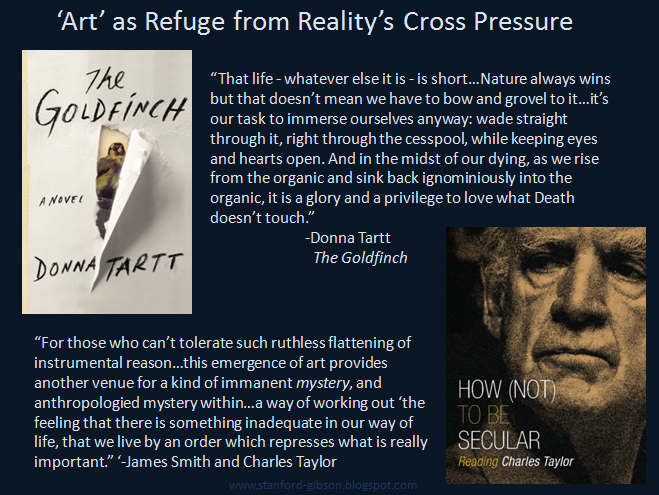 Art = an immanent space where we try to satisfy lost longing for transcendence…a ‘place for modern unbelief’ to live without settling for the utterly flattened world of mechanism or utilitarianism – but also without having to return to religion proper.” 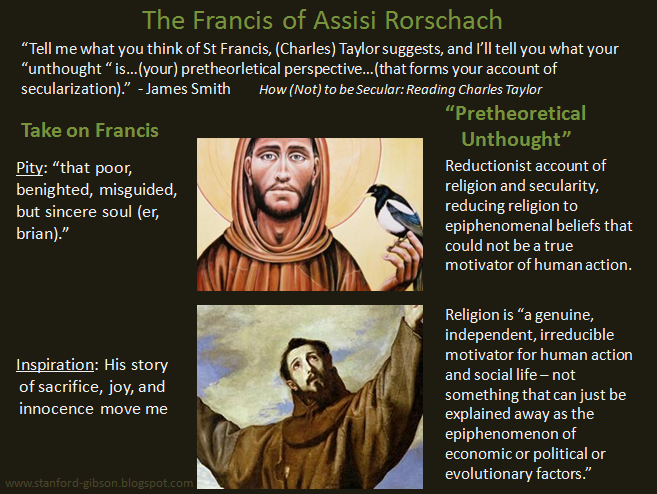 ‘Aspiration to wholeness’ was one of my favorite ideas - which takes two forms, depending on which way we've flattened our world.  Those who major on the immanence of this world have to account for fullness, and those who major on transcendence have to affirm the ordinary (which has occupied much of my preaching lately, the transcendent frame has to make as much sense of immanence - work, romance, pain, tedium - as the immanent frame has to account for transcendence).

Epistemology follows ethics regardless of worldview (note: the meme isn't meant to suggest mystery, but sequence.  Biologically, the egg unequivocally precedes the chicken, laid by some evolutionary proto-chicken) 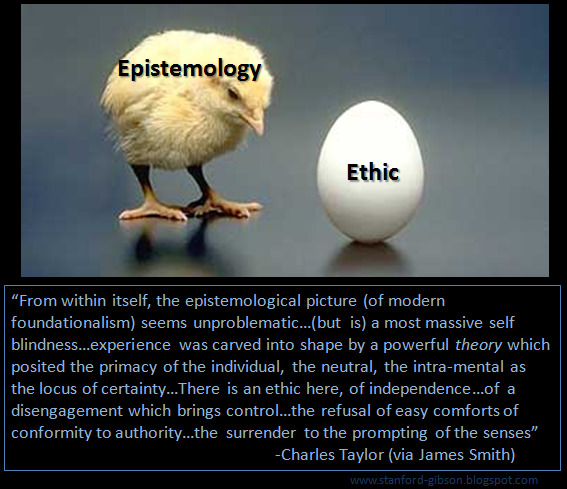 Taylor Summarized in an Equation

Of course, it wouldn't be a stanford summary without trying to express something analytically.  Taylor argues that transcendence haunts us.  It is the feeling that our experience and observation is not somehow divisible by 'The Closed Frame' of the secular subtraction stories or exclusive humanism. 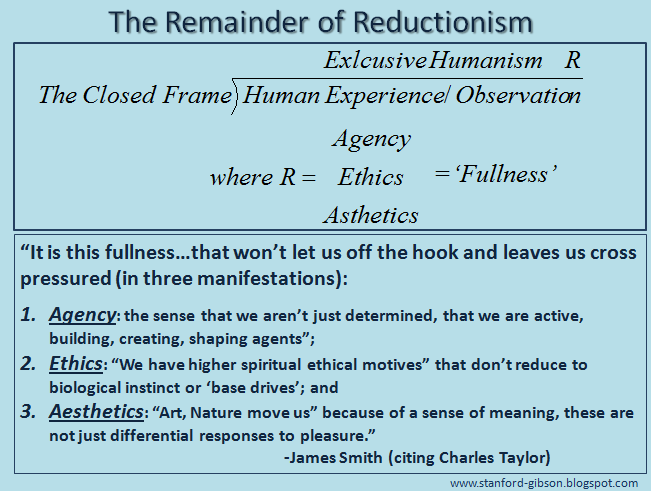 Sure, we can make sense of beauty without reference to the transcendent, but is it parsimonious.  At least it leaves us cross pressured, leaving a remainder of reductionism

The closed frame lacks “sufficient resources to account for fullness”...or, it is indivisible, leaving non-trivial remainders that require explanation for our synthesis to truly 'correspond with reality.' 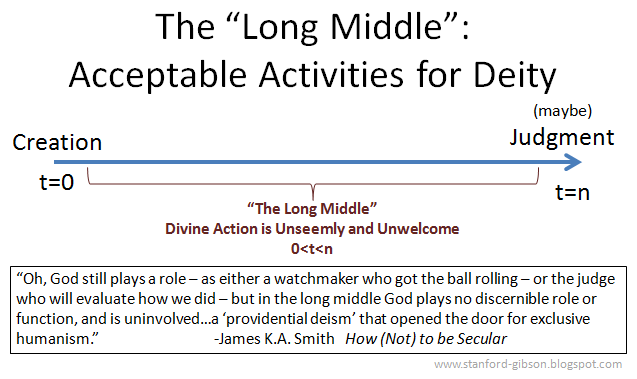 Human Porosity and the Buffered Self 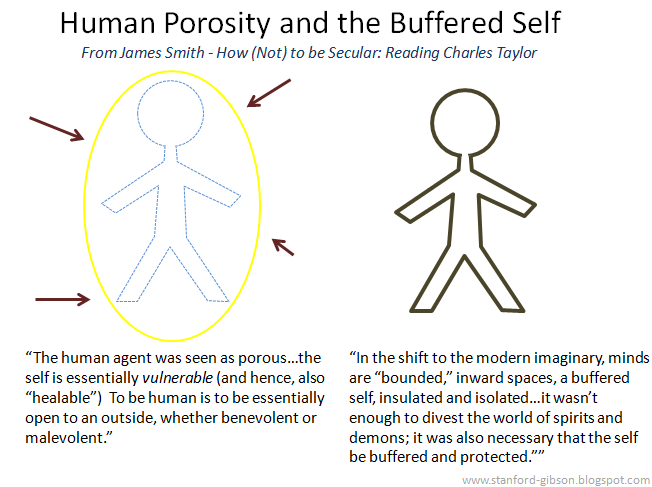 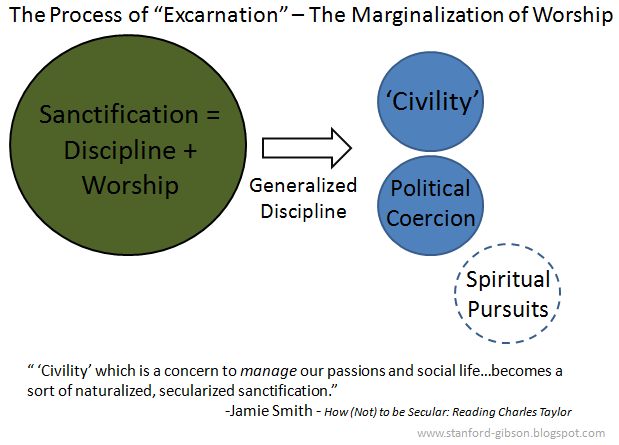 One of Taylor's central and most helpful ideas is that the subtraction stories of secularism (e.g. Dawkins God's =n-1), that what we have is the inevitable remainder of disenchanting the universe, is insufficient, mainly because we insisted that 'meaning' remain in our disenchanted universe.  To retain meaning, we had to add something for everything we subtracted.  So secularism was not so much a series losing but of eclipses, replacings. 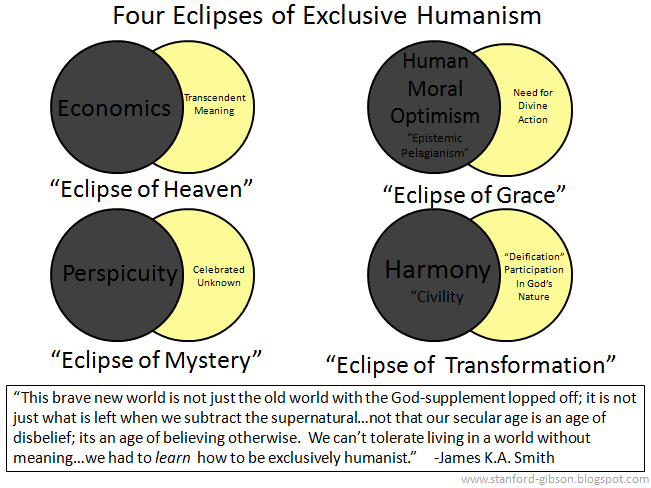 This post was written while listening to The Suburbs by Arcade Fire
(Which Smith also claimed as the dominant soundtrack of his book, not only because its good writing music, but because it captures the cross-pressure of modernity so sublimely).

Email ThisBlogThis!Share to TwitterShare to FacebookShare to Pinterest
Labels: Charles Taylor, How not to be secular, James Smith

15 Million Merits: The Commodification of Outrage


Note: It is awkward to write about Black Mirror (now on Netflix).  The first episode is among the crassest[1] most desultory bits of film I've seen.  I don't recommend it.  I recommend skipping it, actually.  But the series isn't serialized.  Each 60 minute show is a self contained work of short fiction.[2]  But the second episode was one of the best things I've watched in a long time.[3]  I'm writing about the second episode (15 Million Merits), and it is impossible to write about without spoiling.  So this piece assumes you've seen it.  You can find it on Netflix or in its entirety on YouTube: 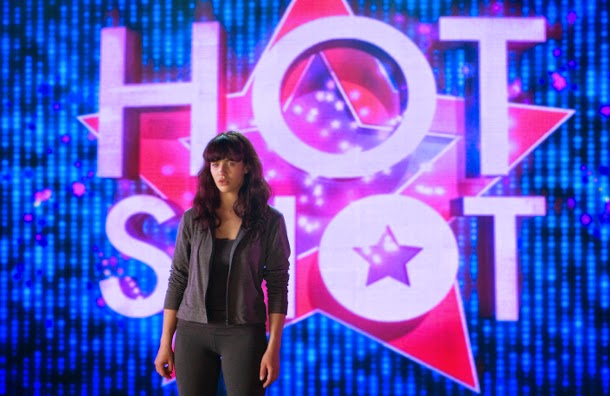 The powers enslave Abi, distilling and commodifying her beauty into something salable and sad and thin.  The episode could have ended there.  It would have fit the tone of the series, and the theme.

But no.  The narrative counters with a montage,[4] as the protagonist sets out on a rescue mission of sorts.  Bing, is motivated, we suppose, either by love or by justice or by some other noble sentiment we do not bother to define precisely, but cheer.  This redemption narrative sets up the actual, more devastating reveal.

While we can easily imagine the commodification of physical beauty, we did not suspect justice or love might be quite so vulnerable.

But the three judges are very good at their jobs.  They immediately see what we could not. 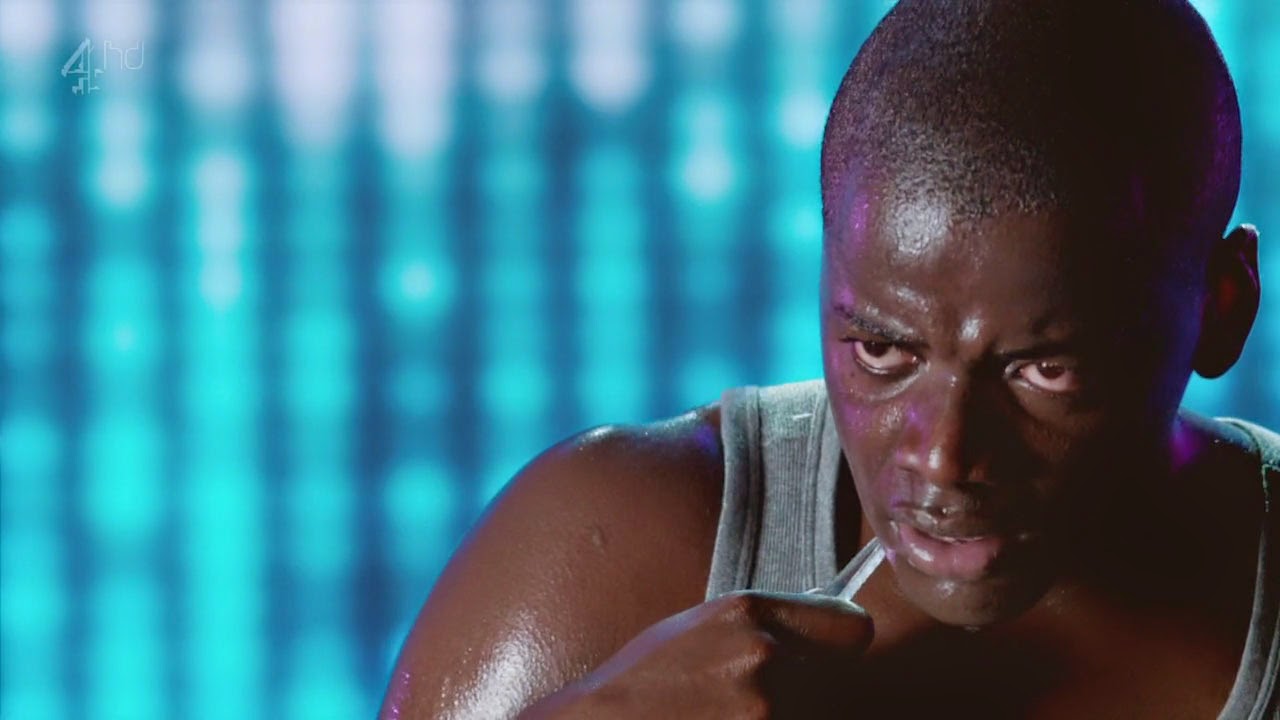 Outrage is a commodity.  Anger creates celebrity.  The story argues that the moral distinction between the pornographer and the prophet is fuzzy, both are profitable diversions, stimulating our nervous systems to provide ‘bait’ for our indentured labors.

Just like beauty, which starts out pure and real, then distilled and monetized by a ‘service industry’ for its neural signals, the stirrings of justice can be redirected to create desired brain states.  The denunciation of diversion becomes diversion.[5]

Outrage is so often about us.  It is about our desire to feel justified, righteous, wise, to transcend the rabble to be more than the mindless masses, to assuage the guilt of the violence we are part of but powerless to subvert.  Outrage is a desired (and addictive) brain state.  It is an arousal, an appetite.  And like other forms of arousal, an industry springs up to meet the demand…and…cha ching.[6]

That’s how we get Bill O'Reilly, Nancy Grace, John Oliver, Sean Hannity[7], Rachel Madow, Glen Beck, et al. and yes, even Jon Stewart[8], when most of us find their worlds cartoonish and barren and flat, without the topography of nuance or the ecological heterogeneity of generosity for the other.

More importantly, outrage is easy.  It tears down the makings of others.  Breaking is easy.  Making is hard.  Crafting beauty or value that survives the onslaught of outrage, that persists beyond distillation of appetites, that rings true (because it is) or makes sense of our swift brief lives or tangibly serves the human experience (of particular humans) is the mandate.[9]

In my work and art and preaching, I long to be more maker than breaker.  I’d like to be good enough at these things to eschew the nervous system subsidy of commodified outrage, offering an alternative that ‘rings true’ that is constructed more of hope and joy and generosity than self justifying anger.

This post was written to the Dawes Pandora Station.[10]

Footnote on the final scene[11]
[1] Here's a spoiling summary: "A British princess is taken hostage and the only demand for her safe return is for the Prime Minister to have sex with a pig on live television.  Public sentiment drives him to do it.  A year later, it seems he's a hero, but his marriage is destroyed."  There, you are up to date. You can start with episode 2.  Incidentally,  this was very clever and artfully made, it was just felt like it was intentionally trying to ‘cross lines’ – shocking for shock's effect that underestimated me as a viewer.  The other three we have watched have been brutal and devastating, but have not made that mistake.
[2] As my end of year reading summary will show, I have gotten into short fiction in a big way (both reading and writing), specifically short science fiction.  Since science fiction is fundamentally a thought experiment, the short form is usually optimal.  I have thought more than once, ‘this story would make a great film, if it was ok for films to be 45 minutes,’ and then thought about Louie’s work and the old Twilight Zone stuff thinking that the artificial film length really limits us.  It turns out, Black Mirror was exactly what I was hoping for.
[3] And the next two episodes were both brilliant too, though they are uniformly devastating.  Black Mirror’s thought experiments are uniformly dystopic, in understated ways, but is darker and rings truer for casting a modest but hardly livable sentence on human technological futures.
[4] Which, if it hadn’t been the second episode, I would have known to distrust.
[5] As does denunciation of denunciation of diversion…the ‘irony’ (AIHCTBK) is not lost on me.
[6] There’s a pun for you.
[7] This guy is my least favorite.  I tried to watch him in a hotel twice, and just couldn’t do it.    My first draft called him John Hannady.  So I can’t claim a lot of knowledge, and my caricature might be unfair and is based on unflattering Stewart clips, but I put the risk of him not belonging in this paragraph at ‘low’.
[8] Stewart gets a pass so often because he’s genuinely likable.  And, to his credit, he interacts with larger conversations, something we like to call, ‘books’ in a way almost no one else does.  But while I agree with his content 60-70% of the time, his rhetorical tricks are often sleight of hand, converting outrage (lazy outrage, outrage that requires simultaneous entertainment, which makes him something of an artistic savant) into advertising dollars.
[9] At the heart of my theology of work and art is that when Genesis says we were made in the  image of God, that the context suggests that  we were ‘made makers.
[10] Seriously, have you heard “A Little Bit of Everything” – Brilliant - https://www.youtube.com/watch?v=vin0U-ej1L8
[11] Unrelated, to the essay: The final scene shows him looking out a big window to a rain forest vista.  The popular position on the internet seems to be, ‘the outside isn’t real, it’s just an upgrade on the simulacrum.’  I have an unlikely alternate hypothesis.  I think ordering society into an economy of energy production and consumption of electrons, made society sustainable.  This little dystopia was the way we ‘saved the planet.’  It might have been a televised illusion, but what if an isolated world of self generated entertainment and sustenance is the only way the rest of the world heals.  We inflict violence on each other in our own little ecosystem, to restore the rest of it.  This would add another level of moral complexity to the story, sacrificing humanity (so to speak) to save the rest of the biosphere.

And then there’s the penguin statue, which is a metaphor for the conversion both Abi and Bing experienced.  Bing 'upgrades,' his penguin totem converting something ephemeral but real into something sustaining, reproducible, and false.  Grasping at the ephemeral, and destroying it in the attempt to generalize it, and sustain it.
1 comment: