So that happened…
…The election came and went, and in keeping with the characteristic relevance of this little blog[1] I am finally ready to comment on it.
Anyway, let me set up my thoughts with my two favorite comedy pieces on the election:


http://youtu.be/dX_1B0w7Hzc [3]
Lincon’s opening line in the last one says explicit what the other one and much of the comedy and rhetoric surrounding elections communicates:
“By the power vested in me by this giant bald bird
The president shall not be the shiniest of two turds.” -Nice Peter (as Lincon)
And the general frustration with the quality of candidates doesn’t just show up comedy or discourse.  It actually emerged in several polls.  Consider three:
1.       One district in Nevada returned 10% of the vote for “None of the Above”
2.       A district in North Carolina where a cat came in third
3.       And a surprising number of people voted for Rosanne Barr for PRESIDENT (who may be 3% more qualified for political office than a cat).
But why is it always like this?  Why do we get to the actual choice and always want to push the ‘restart’ button.
My father had a theory that has infused me with political cynicism for decades.  He argued that in order to rise to the level that one of the political machines would recognize you as a candidate, you have to be so morally compromised and bought and sold that it is impossible to vote for a good man for president.
This is an alternative to the standard us-them distinction that emerges from partisan politics.  Instead of the ‘us’ being ‘my party’ and the ‘them’ being ‘the other party’, it redefines ‘us’ as the reasonable electorate composed of decent people and ‘them’ as the political machine. 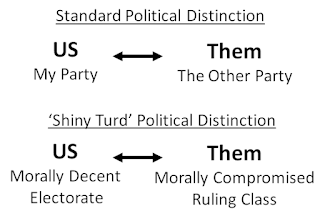 But I don’t think that is the whole story.  When I look at Governor Romney and President Obama, I don’t see wicked men who inhabit qualitatively different moral realities from each other or from ‘the rest of us’[4].  I see a couple of extraordinarily gifted, morally flexible, political pragmatists who genuinely want to lead our country into the most just and prosperous future (despite divergent beliefs on effective tactics) but who also love power and desperately want to wield it.
So how do we get to the point that we can’t stand these guys?
I have a two word answer: Full Disclosure.
You see, the difference between them and me is not that I am good and they are bad.  The difference is that they have been subject to a process that no human can withstand: Full Disclosure.
Normal people have the luxury of partial disclosure in our relationships, so people like us.  We get to selectively reveal our positions, ideas, history, prejudices, hurts, fill-in-the-blank-a-phobias, selfishness, addictions, and overall crazy, so people generally think we are good and kind and just.  And if we have been appropriately socialized with the standard set of cultural coping mechanisms, we can keep it up pretty effectively in all but our closest relationships.[5]  But it’s a ruse.  We maintain respectability through the filter of partial disclosure.
But human brokenness cannot withstand the near omniscience that a multi-billion dollar information-entertainment industry generates.  In the end, a person – even an incredibly impressive person - turns out to be…just a person.  And a person turns out to have inescapably turd-like qualities.
And I think that is one of the things John is getting in his gospel, when he says:
19The light has come into the world, and people loved the darkness rather than the light because their works were evil. 20 For everyone who does wicked things hates the light and does not come to the light, lest his works should be exposed.
Full disclosure terrifies us.  Transparency is something we demand, until it is applied to us.  And one of the central insights of Christianity is that if we take a break from our self evaluation through the eyes of others…whose opinion we have manipulated through the process of selective disclosure…and if we ‘step into the light’ and allow the gaze of omniscience to fall on our behaviors and motivations, we emerge with a very different self evaluation.  We emerge with a self evaluation that requires someone or something to rescue us from ourselves.
And so, I reject the us-them of party rivalry, but I also reject the us-them of the ‘shiny turd syndrome’ in favor of an us-us. 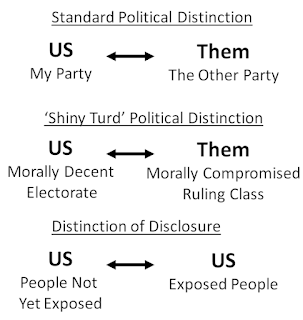 I am the turd…just not that shiny.
I would wither under the gaze of full disclosure faster and more cataclysmically than these guys did.  And so would you.[6]  But the Christian narrative argues that full disclosure is something we all actually experience.  There is One who is not fooled by our ‘press releases’ and ’30 second spots’…who recognizes motivations that we have not only stopped advertising but have stopped noticing ourselves.
But unlike the relentless harm and self promoting injury behind the quasi-omniscience of ‘the press’, actual omniscience is laced with love and compassion.  Divine judgment is not a snarky expose or petty entrapment.  It is an invitation to healing and relationship.  In Jesus, the one who knows is also the one who loves and the one who heals.
This post was written while listening to Babel[7] by Mumford and Sons
______________
[1] I am still working on posts on the Battlestar Galactica and Lost Finales…and mewithoutYou’s third album that came out several years ago (which doesn’t seem that timely given their 4th album came out a year ago).
[2] The hunger games version of “Bad Lip Reading” is the hardest I’ve laughed since the first season of Community.  http://youtu.be/QjGk_jU6t5A
[3] On a serious note, this essentially articulates my perspective on the debate.
[4] This is why, CS Lewis argues, there can never be a ‘Christian party’.  Besides the awkwardness of Christians wielding power, there is the issue that Christianity teaches things that both parties value, stuff like justice and freedom.  (And if you don’t believe that both parties actually want a just, free and prosperous society, you don’t know enough thoughtful people of the other party).  But it is entirely appropriate for Christians in good conscience to come to different conclusions on the tactics it takes to get there.  And tactics are a matter of individual conscience…and the Scriptures demand (for good reason) that matters of convince require loving diversity.  Therefore, Lewis asserts a Christian party can only ever be a ‘some of the Christians’ party.
[5] This is also why many people end up feeling the same way about their parents and spouses as we do about candidates.  Family is the ferment of full disclosure.  You cannot be good enough to be loved in that context.  Love has to be given.  It has to be a grace.  Love in the context of the disclosure of close quarters only works if it is a place of forgiveness and the active pursuit of being ‘for’ the other despite their failings.  This is also the stuff of platonic intimacy, and one of the reasons our culture has put so much weight on romantic relationships that should be carried by intimate friendships.  Our friendships are primarily value-added commodities rather than arenas of grace…and so they are fragile and ephemeral.
[6] If you read this with the hopes that I would disclose who I voted for, I apologize.  You might be able to find something in the archives that provides insight into that question.  But, frankly, I am much more interested in the humanness of the process than the agendas of the parties.  If we can’t talk about power in love, we are not qualified to wield it.  If we can’t assert a little self skepticism we are not qualified to exert political skepticism.  And while we are at it, if we do not shudder at the complexity of economics and the poverty of our tools to isolate sensitive variables we have not begun to select the right economic way forward for our country.
[7] This post, and many, many others.  Just a great album.
4 comments: