I’m teaching on my favorite Genesis passage on Tuesday night.[1] Jacob’s mysterious wrestling match.[2] Genesis 32 is alternately vivid, complicated, dramatic, confusing and thrilling. The characters [3] are complex and layered. But there was one fun and surprising parallel that I thought warranted a post: 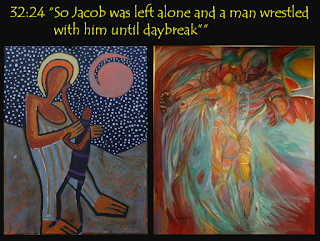 The pericope culminates in an unhelpfully parsimonious verse…

32:24 “So Jacob was left alone, and a man wrestled with him until daybreak.”

Which leads to the big question. Who, precisely, did Jacob wrestle?

The text frankly is coy. It’s abrupt. Honestly I wish verse 24 was like 5 times longer. The author spends 33 words detailing precisely how many of each ungulate Jacob set aside for his brother.

The verse calls him ‘a man’, elsewhere the Scriptures call him ‘an angel’ but neither of those can be the whole story, because at the end of the smack down…when everything is said and done…Jacob has a moment of recognition. It is like those final moments of a movie with a great twist ending, a film like the Sixth Sense of The Usual Suspects where someone we thought we had pegged is actually not even close to who we thought they were. Jacob realizes that his opponent was not just a man or even a cosmic messenger. 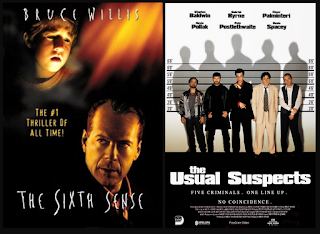 At the end of the fight Jacob realizes that he has in a confusing but indisputable way…fought God himself.

And it gets weirder, because this actually happens several times in Genesis. A corporeal character will show up and the text is ambiguous about whether it is a person, an angel or God himself. But, these appearances are more than a curious spandrel of an ancient text…they compose a theme of the greater story.

You see, the God of Abraham, Isaac and Jacob is a God who in a confusing but indisputable way tends to show up…I mean actually show up…in a corporeal, physical, form, from time to time…usually at the climax of the story. Christian theologians call these appearances ‘theophanies’ which essentially is a fancy word for ‘times that God shows up’. Historically, Christians have interpreted the shadowy Genesis figures as appearances of the second person of the trinity…previews of the pre-incarnate Logos [4] …or, in other words…Jesus shows up.

You see in Fight Club, before we actually meet Brad Pitt’s character, he shows up five times…which incidentally is an important clue to how the story will play out. Now you probably won’t notice it the first time…most people don’t even notice it the third time. In all but one case he just blips on the screen for a single frame…but if you watch this film as many times as my wife and I have, you eventually notice that Tyler Durden makes shadowy and indisputable appearances before he is introduced as a main character. See if you can catch it in this clip: [5]


That is what I make of these theophonies…the places where God ‘shows up’ in an ambiguous but undeniably corporeal form…it is a preview of the coming main character. 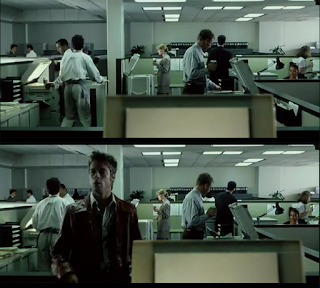 [1] This is essentially a stand alone excerpt lifted from that talk. I’m sorry if that is lazy blog content…but our house has pass around roughly 6 discrete illnesses in the last month. A family is kind of like a patch network for meta populations of nasties. One of the theories of why less robust species persist is that in a discrete patch network with periodic disturbances, poor competitors who are good dispersers and early colonizers can essentially jump from patch to patch. This may or may not explain the species scale evolutionary persistence of poor competitors, but it sure does seem to explain how illness that hits a 6 patch (person) household will stick around for weeks.
[2] Genesis 32
[3] Jacob is, easily, the most disappointing of the patriarchs…and easily my favorite. He is complicated, self willed and clever. God literally has to throw down with him to finally get his attention…but he does. Such a great story.
[4] “He was with God in the beginning” (John 1)
[5] There is another clip that shows them all and then slows them down here.
5 comments: