I remember playing and enjoying the game Hi Ho Cherry O! as a kid. It is just the kind of unskilled experiment where individuals vest arbitrarily in the outcome of a random number generator that children[1] enjoy. But I recently oversaw a game between two three-year-olds that went on, and on, and on. The toddlers patiently awaited the outcome, spinning and obeying the spinner with surprising, unquestioning[2], attention. But I was losing my mind. So I occupied it by wondering if the game was statistically stable. It was a question that occupied me well past the termination of the interminable match. So I wrote a Monte Carlo analysis to answer it. 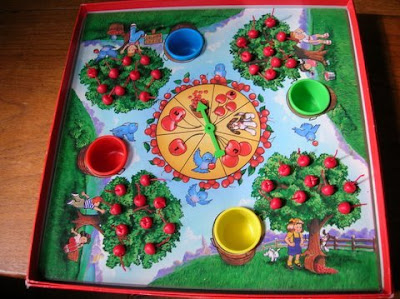 In case you are unfamiliar, here are the terms of this particular random number generator: The object of the exercise is for one party to achieve a score of +10.[3] There are seven equally likely outcomes for each random event, including four positive outcomes, a +4, a +3, a +2 and a +1 event. On the negative side, there are two -2 events.[4] So far it seems like a problem that would rapidly converge to a +10 solution. However, it is the seventh outcome (the third negative outcome) that adds the dramatic non-linearity. The ‘bucket spill’ event resets a player’s score to zero, meaning that it can register anywhere between 0 and -9…counteracting the convergent positive bias of the event.

The Results: The ‘bucket spill’ event does, in fact, produce a highly skewed distribution of play time. In 50,000 simulated games the average game lasted 9 turns (18 spins) but the longest game lasted 71 turns (142 spins) and there is a non-trivial probability (~5%) of a game that lasts more than 20 turns (40 spins). 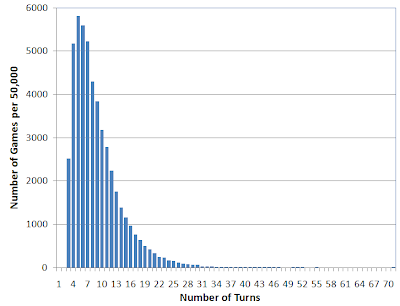 Now, aren’t you glad I’m blogging again? I mean, seriously, where would the internet be without this kind of essential analysis?[5]

___________________________________
[1] And adults, if the popularity of fantasy football is any indication…or the ability of adults to vest in one of those ’racing dots’ on the jumbotron at major sporting events. This, incidentally, is why the ‘sausage race’ (which is as near to literal and as far from ‘disturbing euphemism’ as it possibly could be) is one of the great intermission events in all of sports. The outcome is uncertain and anything can happen (including assault by a player). It is easier to vest and cheer with gusto for the Italian Sausage or Bratwurst. There is an insight here about the theology of election or philosophical determinism or openness theology, but I have committed to make this an entirely un-philosophical post, so I refuse to explore it. (Though, actually, I find the philosophy of time practically impenetrable, so really I am just punting. It’s a blog. I am satisfied to make the connection between sausage racing and election – I don’t necessarily need to analyze it.)
[2] Besides a few attempts at “Subtle Cheating.”
[3] The actual length of the game is driven by the difficulty toddlers have in hanging little plastic cherries on cardboard trees. I suspect the pedagogical value is as much in fine motor skills as it is in counting.
[4] Apparently birds and dogs both consume cherries in pairs. We had cherry trees when I was a kid and I can report that this seriously undervalues the consumptive potential of birds and overvalues canine appetite for fruit. But, back to the statistics…
[5] Seriously, though, here is the short term plan. I will run short pieces (mostly of more import than this one), a Fragments and Links, and my 2011 books post through the end of the year and then will do a 2-5 part series on campus dating and sexuality (including another nerdy statistical post, some thoughts on Donna Freitas’ Sex and the Soul, and hopefully reflections on Beth Bailey’s From the Front Porch to the Back Seat: A History of Dating – the two most scholarly yet helpful texts I have found on the topic) in January leading up a talk I am going to give on the topic.
[6] I am actually listening to a play list that is composed of ‘bookmarked’ songs from Pandora that I finally just bought.
3 comments:

Theo-Coleopteraphelia: Actually, “An inordinate fondness for beetles” is precisely what I would expect 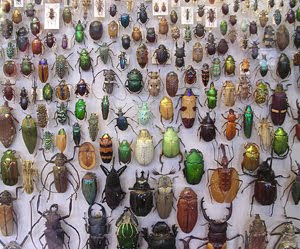 There is a famous[1] exchange between the early, flamboyant, population geneticist J.B.S. Haldane[2] and a nameless, religious inquirer. In response to the question “What can we learn about the Creator from biology?”Haldane responded:

“An inordinate fondness for beetles.”[3]

You see, Coleoptera compose nearly a quarter of all described species. So many biologists cite this quote[4], from this famous, charismatic, atheist,[5] as a sort of snarky shot at all things teleological. If God exists, he is a beetle-fancier. Well, first, that would put him in excellent company:

But upon review, isn’t that exactly what you would expect of the God described in the Christian Scriptures? Doesn’t it seem consistent with a God who said “Blessed are you who hid these things from the wise and revealed them to babes” and “blessed are the meek for they shall inherit the earth”[6] and “those who are last will be first” to hide the great pinnacle of his creative glory in an unassuming basal trophic level.

My friend Justin has said something like: “the trajectory of the naturalist invariably gravitates from charismatic species to insects.”[7] I have found this to be true. The deeper I get into the ecology rabbit hole, the more entranced I become with insects. Otters and polar bears are the ‘gateway drug’ to the intoxicating world of biological diversity.

It is precisely this kind of God who would not ‘dance’ for the miracle seekers and who prefers a measure of hiddeness that would make this unassuming organism replete with wonder. It is precisely the kind of God who counter-intuitively embeds his glory in unassuming ‘jars of clay,’[8] and who chooses particularly unremarkable human institutions (e.g. the wandering Hebrews in the first testament and the church in the second) to make himself know, who builds the best part of reality ‘just beneath the surface’, whose ‘theme and variation’ artistry would center for nearly a quarter of its production on the most unassuming of his makings.

Upon further review, a special fondness for beetles is precisely what I would expect.

Beetle image from here
________________________
[1] It is uncited and has been considered apocryphal by some. But Gould devotes an entire essay in Dinosaur in a Haystack to the validation of this quote and generates a compelling body of evidence.
[2] Haldane is an interesting thinker outside of his early contributions to population genetics. His other famous quote is: “I have no doubt that in reality the future will be vastly more surprising than anything I can imagine. Now my own suspicion is that the Universe is not only queerer than we suppose, but queerer than we can suppose.”
However, less famously, he provided the raw materials for Plantinga’s evolutionary argument against naturalism (which I don’t love, but cannot totally dismiss…I’ll do a post on it someday…but until then): “It seems to me immensely unlikely that mind is a mere by-product of matter. For if my mental processes are determined wholly by the motions of atoms in my brain I have no reason to suppose that my beliefs are true. They may be sound chemically, but that does not make them sound logically. And hence I have no reason for supposing my brain to be composed of atoms.” -"When I am Dead" in Possible Worlds (1927) This led at least one author to suggest that despite being a Marxist and a materialist, Haldane ‘was an unabashed mystic.’
[3] If this wasn’t Haldane, it was certainly a ‘deutero-Haldane’, of an ‘editor of the Haldane school’ because it has the right content, tone and vintage. And yes, I am extremely pleased with myself for coining ‘deutero-Haldane.’ That has got to be the best biology IM-sports team name in history.
[4] Roughly half a dozen of my professors and introductory texts have related this quote.
[5] What most people don’t know is that the other great, early population geneticist R.F. Fisher, (and a professional as well as personal rival of Haldane) was a devout Christian. None other than Dawkins argued that Fisher was the ‘greatest of Darwin’s successors.’ It is often overlooked that the history of evolution is replete with substantial Christian contributors (particularly plucky Anglicans).

My area of emphasis advisor in the Ecology department gave a lecture where he discussed the complicated relationship between these two men including a widely believed (though, possibly apocryphal story) that Haldane stormed out in protest in the middle of prominent scientific meeting. Only he had stormed out into a closet. But he stayed in the closet until the room had cleared rather than emerging and admitting his mistake. 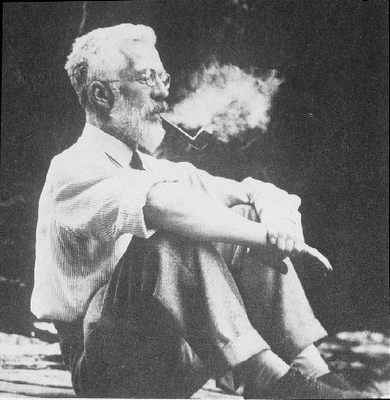 [6] This is a favorite verse for people to mock because it is so counterintuitive. My favorite shots at it are a vintage onion article where the Pope revokes the blessed status of the meek and the exchange in Firefly (deleted scene) where Captain Mal says “More than 70 earths spinnin' about the galaxy, and the meek have inherited not a one. ...” (btw, how is that for nerd cred, quoting deleted Firefly scenes.)
[7] This is a paraphrase. I couldn’t find the quote. But the insight is his.
[8] Paul’s famous description of the Church in 2 Corinthians 4.
[9] I am going to see NT Wright speak on Wednesday. I described it to one friend as similar to going to see a band live. I like live shows because they infuse a fundamentally consumerist transaction with a modicum of relationship. They help make art something more human than commerce. Connecting artist and patron in a personal venue enlarges affection and helps the relationship transcend a crass consumer interaction. I feel the same way about authors. In the next year I will probably spend at least another 1,000 pages with Tom. It will help a lot if there is a veneer of relationship there. So I am going to hear our generations most penetrating and affable theologian speak, not as a sort of celebrity chasing, but as a personal subsidy to our already substantial (though asymmetrical) relationship.
2 comments:

Blowing off the Blogging Cobwebs

Well I went 0 for October on posts. But I’m afraid that occasional black outs are the only way I am going to be able to sustain this blogging thing. October included a stretch of 5 campus talks in 3 weeks…so that is where most of my creative energy went. As always, links to those talks can be found here.

But I have a few things lined up to run in the coming weeks, including a number of short pieces, a mostly music Fragments and Links post, and, eventually, a 2011 in books post. So stay tuned, for a strong (for me) end to 2011.

This post was written while listening to the Thrice[1] channel on Pandora.
________________
[1] I went to the Thrice concert in Sacramento last Sunday. It was great. And then I found this. Turns out Dustin Kensrue also has three kids abut the same age as mine (all under 4). I love that he can still bring it. 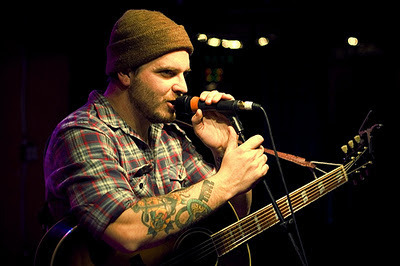