For some reason blogspot isn't allowing me to load pictures.  I have several posts and a whole Camboida travel series ready to go as soon as I get this resolved.  But until then, I spent most of the last 2 days on airplanes and in airports, which generally means...I wrote a terrible poem that you get to read.  The poem was based on the following passage from Chesterton's Orthodoxy[1]

"But if the mouse were a German pessimist mouse, he might not think that the cat had beaten him at all. He might think he had beaten the cat by getting to the grave first. Or he might feel that he had actually inflicted frightful punishment on the cat by keeping him alive. Just as a microbe might feel proud of spreading a pestilence, so the pessimistic mouse might exult to think that he was renewing in the cat the torture of conscious existence. It all depends on the philosophy of the mouse...You cannot even say that the cat gets the best of it unless there is some best to be got." Orthodoxy - The Eternal Revolution

This just seemed to beg for a poem (at least it seemed to do so in the haze of total time zone shift somewhere over the Pacific).


The German mouse, full up on cunning
Hatched a plan that spared him running.
He allowed the cat to close the distance
Sentencing him to prolonged existence.

When oblivion is the highest gain,
The surest way to win the game,
Is neither to flee nor run for cover
But make a trophic donation that prolongs the other.
__________
[1] One of my all time favorite books that I am re-reading and has spawned a number of posts in various stages of completion.
2 comments:

So I love Russian Novels.  Among all authors, Tolstoy is eclipsed in my opinion only by Dostoyevsky.[1]  But that is a stylistic and ‘body of work’ assessment.  I think that you could make a credible [2] case that Anna Karenina is the greatest work in the history of the genre.  But regardless of the relative merits of these great authors, I think it is a pretty safe assertion that AK is one of the 5 finest novels of all time.[3]  And now they are making a film.[4]  So I am going to be one of those annoying bloggers who is so protective of a text that I’ll post a preemptive evaluation of the trailer.
But, come on, this isn’t Twilight or even Game of Thrones.[5]  You could even argue that taking on a text from the classical cannon like this bears more responsibility than LOTR.  So I have produced a blow by blow retro-commentary [6] of my initial viewing of the AK trailer.  Also I decided to add an quasi-quantitative measure that I am going to call the NM –Nervousness Meter – which is a scale of 10 (not nervous at all, 100% excited) to 0 (certain this will be a train wreck[7]) which will allow me to plot the emotive arc at the end.
There is probably very little difference between someone who writes a rant parsing every second of the Twilight trailer and someone who does the same thing with this film …but I did the latter anyway.
http://www.youtube.com/watch?v=rPGLRO3fZnQ

0:00-0:06 (NM =6.5) – Adaptation is hard enough if you have a thin text like Pride and Prejudice or even a thematically simplistic one like the Hunger Games.  It is just tough to translate genres.  So ‘book purists’ are often simply dismissed by pointing this out.  I am usually among those who do so.  But if AK, simply cannot be adapted to a 2 hr film[8] because of its sheer scope, depth of characterization and complex of intertwining themes that depend on both of the former…I’d prefer it be left undone.[9]
Still, I was excited that a story I cared about was becoming a film.  So the ‘nervous meter’ started pretty optimistic:
0:23  – (NM = 6.5 - unch) Hmm, Keira as Anna?  Just from the gestalt I would have gone with Rachel Weis[10] or someone, I don’t know, Russian?  But Keira is sufficiently striking[11] and has a good track record with period films, in my opinion. 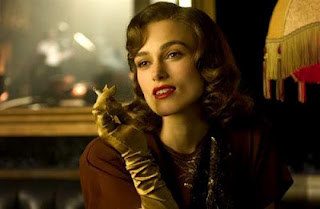 0:29 – (NM – 6.5) Jude Law is fine as Alexei[12] (though when I heard he was attached to this film my thought was, “outstanding, he’ll be perfect as Vronsky” – I wonder if that means I’m old). The Vronsky character also seems totally acceptable from a gestalt perspective too (I know nothing about the actor, but it doesn’t matter much…dude is an empty cavalry uni…he’s not that challenging to act).
0:47 –( NM = 7) These scenes they are showing look and sound great.
0:51 – ( NM =9) OK, I’m in.  There is only one director I would have accepted… Joe Smith.  And we got him.  Direction is a 100% win.  Atonement was as incredible (I wrote a piece on it) and I doggedly defend the superiority of his 2005 Pride and Prejudice[13] adaptation against the BBC truthers.  He is the epic virtuoso that this story deserves.  And that makes a lot more sense of Keira, too.  She is Smith’s leading woman.  If we want him, we get her.[14] I can talk myself into this.
1:01 – (NM = 7) ‘A Bold New Vision’ – from the interviews I read this means that most of this is filmed on a stage as a metaphor for ‘the stage of the Russian aristocracy’.  This seems gimmicky[15] and a recipe for the one way this could go horribly wrong…deciding that Levin’s story is dull and that it is expendable to fit the time requirements of a feature film.
1:10 – (NM = 6) – Hmm, speaking of Levin.  We’re over half way through the trailer.  Where is he?  I’m getting a little nervous.
1:15 – (NM = 5) - So Anna just confused love with an orgasm.  This is in character.  That is precisely the kind of confused, shallow person Anna was.  But this is why she is such a tragic, cautionary character.  But I’m a little nervous that we are supposed to identify this as an accurate observation by the moaning, thrashing protagonist rather than the devastating error Tolstoy would have seen in it.  OK, don’t get too cynical…remember, Atonement was stark and honest…and trailers are meant to get people to films.
1:30 – (NM = 9) – And there’s Levin, and that threshing scene (one of my favorite moments of the book) looks great…[16]
1:31 – (NM = 8) …hold on, is Levin being played by a Weasly …
1:32 – (NM = 6) …um, this guy seems like kind of a tool…
1:34 – (NM = 4) …yikes, that was not much Levin (3 seconds?), and no Kitty, and what we got made him seem like a pompous, d-bag.  OK don’t panic.
1:33 – (NM = 3.2) rewind[17] …hold on, there’s Kitty.  Um how old is she?  She looks 12!  Now we’ve got a pompous, lecherous, d-bag.  Don’t panic.  Smith is setting up a caricature so he can turn it on its head.
1:41 – (NM = 3.5) No more Levin sightings (the narrative really seems to be centering on the affair), but I’m just thinking about casting a Weasly.  I guess I don’t mind casting Levin with a no-name.  It actually makes a lot of sense.  You don’t want such a complex, sublime character to have to carry the burden of the other performances on a famous actor’s IMDB page.  Of course Ed Norton[18] was the call here.  But maybe this guy killed the audition.  Maybe he spent all of the time in the last 7 years that he wasn’t flying around on a CGI broom working on a Russian commune because he loves this book so much and like Christopher Lee and LOTR, it has been his life’ s goal to play Levin.  I’m talking myself into this.
1:59 – (NM =4.8) There’s  Levin again…I think…
2:00 – (NM =3.2) …and gone.  He’s like a ninja.  You can’t actually tell if he was even there.  And that would be great...IF HE WAS A NINJA…But this isn’t a period marital arts film… he is a Russian farmer who is supposed to be the central grounding character of the story.  We should be able to tell that he was on the screen.
2:10 –(NP = 3.7) And, the train.
2:15 – (NP = 3.5) I don’t remember this much dancing in the book. 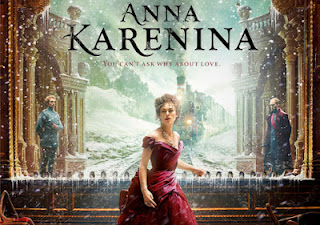 2:24 – (NP = 2) “You can’t ask why about love.” …?...What?...Are you serious?  Is that ironic?  Is that really the summary quote you want to leave us with?  Is that the central idea of the film? (It’s the tag line on the poster.) I realize that is an incredibly popular modern sentiment…but it’s absurd.  And that is why reading old books is a useful discipline.  It can force us to asses assumptions of our age that none of contemporaries would even think to challenge.  Old books allow us to encounter people who call BS on absurdities of modern culture to which we have become too accustomed to evaluate.  Did the film makers even read the book?  Was there another novel with that title?
2:26 – (NP = 1.4) What? The Weasly actor isn’t even in the top 4.  Does that mean that Levin isn’t a ‘main character?’
2:31 – End (NP = 1.2) …?...?...What?  Really? 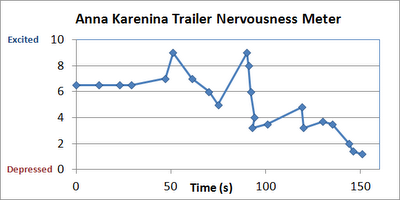 Here’s the thing.  I recognize the limitations of adaptation.  I appreciate that an adapted work of literature becomes its own work of art.  And if a text as brief as Pride and Prejudice is difficult to pull of in a feature length film, AK is going to require deep, devastating cuts.  You might even be tempted to cut half the book…say, the Levin’s half.  From what I can tell, Levin is featured in approximately 4% of the trailer (a very generous 6 of 150 seconds).[19]  And the one line we get from him is stuffy and pompous.  But here’s the real issue.  From the trailer it seems like the themes of the film are not only not resonant with the themes of the text…they are the OPPOSITE!  It is one thing not to do justice to a text in an adaptation.  It is another to do violence to it.
You see, there are two big differences between AK and Madame Bovary that makes the former one of the great works of all time and the latter almost unreadable:
1.      Tolstoy is an HD author.  The imaginative pictures are crisper and the emotions calibrate with reality with a deeper resonance than almost anything I have ever read.[20]