Integrating Infinity over Orthogonal Dimensions: The Cross as a Coordinate Transform (Or, how does a temporal event like the cross affect eternal salvation?)

So I am teaching a little apologetics class with Dan[1] this year. For the last session, instead of taking on a single big question, we are going to take turns doing 3 minute response to a dozen questions. We collected questions from the students and split them up. I thought I might float a couple of the more novel/experimental answers here before I offered them to the class. Here is one of the questions I’ll be fielding:

How could Jesus’ temporary punishment/death be exchanged for our eternal punishment?[2]

I think the answer is that on the cross, an infinite being experiences a temporally limited (but cosmic) punishment . You see, infinity is embedded on both sides of the equations, but in different variables. The infinite God’s temporal suffering offsets human (for all n, because it is a finite set) punishment, which is eternal but acts on finite beings. In other ‘words’:

Where x is a measure of the breath/size/scope/sentience/sensitivity of the being and t is a measure of time. A suffering God is a non-temporal infinite. The cross could be thought of [3] as a coordinate transform…bringing the infinity of the ‘spatial scale’ to act upon our infinite temporal scale.

It could also be argued that the magnitude of the punishment on the cross is itself an infinite quantity. The cross was the un-Godding of God. In our Trinitarian model, the cross represents a space-time event [4] in which God experiences God-deprivation.[5] That is a deprivation of infinite magnitude. Or:

where t is time and p is the magnitude of the punishment. A temporally limited infinite magnitude is exchanged for quantity that is temporally infinite but finite in magnitude. 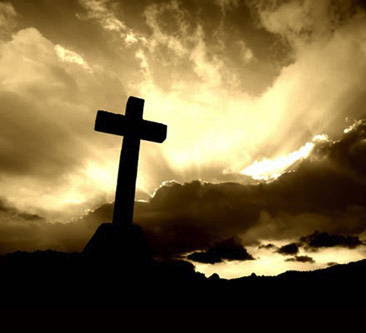 [1] The college pastor and my teaching partner in the campus ministry we are involved with.

[2] The very issue of eternal punishment is its own question that deserves careful definition, canonical and historical analysis, and a truck load of nuance. I realize that this is the more important question. But if we could just posit some classical form of the Christian message that the events of good Friday and Easter somehow provide a means for humans to avoid a mysterious but decidedly suboptimal eternal state…it would allow me to address the question without setting a record for my footnote/post ratio (which as it is, came in >2).

[3] Crassly, reductionistally, and, perhaps, blasphemously. But come on, what is more Cartesian than a cross. It is the very symbol of orthogonal coordinate systems.

[4] Of course there is the whole problem that the question is based on the assumption that God experiences time in the same way that we do, and that the cross actually ‘took an afternoon to unflold’ when God’s relationship to time is, at best, murky. There is also the question of what happened between the cross and the resurrection…which I refuse to touch…even if the creed seemingly inexplicably goes there.

[5] This is a common metaphor used for the mystery of post-mortem existence. The picture goes like this. Those who find God excessive or unnecessary in this life will be granted their wish ‘on the other side’. Eternity comes in two states, Godded and un-Godded. So ‘eternal punishment’ is really just a radically independent existence in a godless state. Relegation to a God-free eternity is not a vindictive revenge but an honest respect for the dignity of human choice. The jaded lover who has been relentless in pursuit finally acknowledges that the loved has the right to go on without the pursuer even if it is to his or her detriment. CS Lewis paints a picture of ‘hell’ in which the inhabitants suspect that they got the better end of the deal…because they get what they always wanted, radical independence.[6] The opportunity for self actualization without meddling.

So, again, back to the math God’s temporal godlessness (sending a temporal rift cleaving the Trinity and inflicting God-deprivation [7]on God) is an appropriate exchange for the infinite God-deprivation which is how our instance on our independence would play out.

[6] footnote to footnote 1: Leading to his classical formulation “Hell is locked from the inside.”

[7] footnote to footnote2: We often talk about the punishment that Jesus experienced on the cross and his separation from God, but it seems like the Father and Spirit would have experienced equal and opposite anguish in being separated from the son.

[8] Two things, (1) I just realized that this is a surpisingly aptly titled soundtrack for this post (and "Don't carry it all" may be the perfect track to accompany this little experiment and (2) amd I the only one who can't get into the Alt-Country version of The Decemberists?