At 5 million views[2], it is likely that you have already seen this. But what you may or may not have seen is the connection between the climactic confrontations with the King Cobra @2:33…and Easter. Of course that is the sort of essential analysis you have come to expect from this little blog.

The first time I saw this clip, all I could think about was Gen 3:14-15 known as the protoevangelium:

14 So the LORD God said to the serpent, “Because you have done this,

“Cursed are you above all livestock
and all wild animals!
You will crawl on your belly
and you will eat dust
all the days of your life.
15 And I will put enmity
between you and the woman,
and between your offspring and hers;
he will crush your head,
and you will strike his heel.”

Historically, Christians have seen in this verse, the seeds of the entire story…an epic foreshadowing of the entire narrative. Humans would live at odds with each other and a malevolent cosmic force until a special human child will take it on and bring down this enemy at huge personal cost. [3] “He will crush your head and you will strike his heal.”

That’s right, in this analogy, the Honey Badger is Jesus. The story of Holy Week is that a cosmic champion in mortal personhood [4] plays out this script from the opening pages of the Hebrew Scriptures. He takes down the serpant but is mortally wounded in the process. 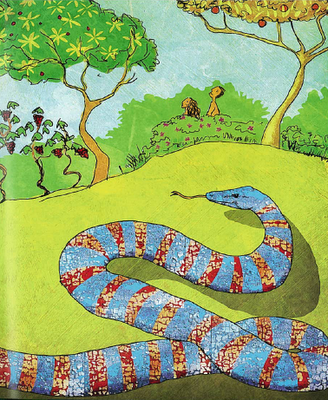 The days that passed between the cross and the resurrection are like the moments in the video where our hero, the Honey Badger, is overcome by the snake bite[5]. In those seeming interminable clicks of the YouTube clock, his bravery looks like foolishness.[6] We don’t have the data to do the toxicology in our heads but we know that the King Cobra is mythically deadly. Surely the Honey Badger could not survive that. The first time I watched this clip, I mourned the protagonist in those moments, sure he was dead. But he knows something about being a Honey Badger that we don’t. He is actually far more bad ass than we ever guessed.

And that is the story of Holy Week. Jesus lets the serpent bite him instead of us…because he can take it. He can emerge on the other side of death and wrap up his victory over the decimated serpent.

In The Lion, the Witch and the Wardrobe (another, more intentional, illustration of the events of Holy Week), when Aslan emerges from death, he says:

“Though the Witch knew the Deep Magic, there is a magic deeper still which she did not know.[7] Her knowledge goes back only to the dawn of time. But if she could have looked a little further back, into the stillness and the darkness before Time dawned, she would have read there a different incantation.[8] She would have known that when a willing victim who had committed no treachery was killed in a traitor's stead, the Table would crack[9] and Death itself would start working backward."


The Honey Badger’s fearlessness (he really doesn’t give a s$#%) is motivated by appropriate confidence that the serpent mortal bite can only inflict a fleeting death…that he will emerge the victor[10] and that the cost is worth the prize. It is a deeply flawed illustration[11], but one that I has captured my imagination this week. I hope that you find this weekend reflective and life giving.

This post was written while listening to The Suburbs by The Archade Fire
__________________________
[1] So, there is more colorful language in my latest two posts than in the previous hundred. This should not be considered a trend (though I really want to work a Tim Minchum song into a post I am working on…so there might be a little more to come).
[2] And rightly so. This is a perfect YouTube clip because it works on two levels. The narration is hilarious but the Honey Badger really is remarkable. It works on the levels of joy and wonder, two of the fuels of our humanness.
[3] Revelation 12 paints the picture of these events as an epic battle between a cosmic champion and a serpentine dragon. I am working on a post about how this chapter is like Lost episode 118.
[4] As long as we are making strained comparisons between the gospel accounts and a silly four minute YouTube clip…the comparison is actually uncanny. Jesus spends the first half to 2/3rds of the gospel texts declaring a new mode of humanness and a new reign of Yahweh…demonstrating his authority over the dark forces that plague our existence. Then each of these texts spends a disproportionate amount of time on the climactic confrontation in the final week. This is not unlike the Honey Badger wreaking havoc on lesser serpents and vermin in the first half of the clip and then turns to the climactic death to life battle at the end.
[5] This is really the only place where I question the artistic choices of our skilled narrator. He shows his hand too quickly, not allowing the tension of the perceived death of our hero to strike us with full force.
[6] Along the lines of Schweitzer’s ‘he threw himself against the cosmic wheel and it crushed him” Christology.
[7] Note: The mystery of the Atonement is a rich and multi-faceted idea. In this post I am stressing the Christus Victor aspects of the doctrine (the oldest and most culturally foreign to us), as Lewis did in his story. However, this does not supplant the Anslelmic ‘satisfaction’ aspects of the cross that evangelicals are more familiar with or the ‘moral example’ implications that Liberal (capital L to indicate a precise theological movement not a political leaning) theologians prefer. Any theology of the cross that champions one of these to the neglect of the others is flawed.
[8] My brother pointed out that the film changed this word from “a different incantation” to “another interpretation” and quipped: “a meditation on that script change will say everything about our culture and the caution I was trying to voice above”
[9] There is a picnic spot in Davis, where I sometimes meet the girls for lunch to watch the trains, that is a big slab of rock split in two…we call it Aslan’s Table.
[10] OK, one more strained parallel. In Christian theology, the cross and resurrection initiate the victory but, of course, the world in general and my heart in particular is still full of all manner of darkness. The victory is implemented over time. One author described the resurrection like D-Day. Once we took the French beach heads in WWII, the outcome of the war was determined. But there was still a lot of suffering, and work and war that was still ahead of them. Thus, after the climactic struggle with the King cobra, the Honey Badger turns his energy to a sustained program of snake eradication.
[11] I’m not suggesting that we respond to the liturgical prompting “He is Risen” with “Yeah, the Honey Badger doesn’t give a s$%^.” And like all parables, it is only intended to illustrate a central idea – not to correspond to the prototype in every detail.

I liked your reflections on the parallel with the resurrection. I wish the author of the video had used better language so it could be shown to children. They would understand the comparison and probably remember something.
Mom

You know what I always wondered about the Serpent...God curses him to crawl on his belly and eat dust (I know that's not the most important bit of that particular cursing, but..)

...Wasn't that what he was already doing? Do we presume that he was a legged serpent as in the archaic form sometimes used for dragon? Or is this a statement that "for you, evolution (and yes I realize the irony of that juxtaposition) is over. You're never getting legs..."?

I know this has no real import, but it just occurred to me while I was reading that.

Many snakes have vestigial limbs...for them, evolution worked towards belly crawling/dust eating. If the Genesis narrative is on a compressed time scale for narrative efficiency...the story fits. :)

Seriously, though, Goldengay has a really interesting thought on why the Shatan (cool phonetic spelling) is depicted as a snake. It is to emphasize the created nature of God’s enemy. Much of Gen 1 is a polemic against other Mesopotamian creation myths…and in many of those the God figure has an equal and opposite (or at least uncreated) enemy. By depicting God’s enemy as a serpent (that most earthy of terrestrial fauna), the Genesis account is taking a firm theological position against dualism. Yahweh might not be without enemies, but he is without peer. The enemy may be cosmic and devastatingly cunning, but it is closer to us in its mode of being than it is to God. I think this take on the serpentine nature of this shadowy figure is mostly right.

On and unrelated note, and it is fun to have my mom comment on the language of my blog. Huge hipster cyber cred there. :)

I've seen that clip at least five times, but this is the first time I've viewed it as a religious allegory. Now that he's also Jesus, the honey badger somehow became even more awesome.