Judah, Joseph and the Role of Self-Donation in Reconciliation: An Alternate Explanation of Genesis 44

Introductory Note: I love innovation. I think creativity is one of the things that makes us fundamentally human. But there is one thing I do where I do not value innovation: Biblical Interpretation.[1] In general I try to let the testimony of the historic church and other wise exegetes temper my wild speculations about what a Biblical text means. I do not fully trust my faculties and let the spatio-temporal community offer their checks and balances to keep me honest. Which brings me to this post. I have never understood the story of Joseph and his brothers and have found most commentaries less than persuasive. Last week I finally realized some things about the larger Genesis narrative that seem to put it in focus. I think I finally get it.

Here is the problem. My interpretation seems novel, which makes me hesitant to preach it. So I would like to vet it to a community. You are this community. Please do not hesitate to weigh in with your take on it in the comments section or to pass it on to friends you think might be helpful. Thanks.

Heroes who are not Heroic: Interpreting Hebrew Narrative

One of the biggest mistakes that people make in interpreting the Hebrew Scriptures is assuming that it is a collection of hero stories that tell us how to live. We look at the lives of Abraham, Sarah, Isaac, Rebecca, Jacob, Leah, Rebecca and Joseph and try to mine their stories for insights about how to live good, just and beautiful lives. There is just one problem with that. These are horrible people![2] The exegetical gymnastics that authors and preachers sometimes do to find an ennobling lesson from the darker chapters of their lives are often comical, periodically embarrassing and occasionally dangerous.[3]

Christians believe that these texts have to be interpreted Christological, as the narrative of God’s peculiar use of an unremarkable, nomadic, middle eastern tribe to initiate his plan of cosmic redemption for our species. The point of the stories is that he uses people who are alternately horrible and honorable to do this (and often, particularly in the case of Jacob, they forget to alternate to the latter). I think there are two reasons for this:

1) The Bible is not about people. It is about God. And he uses douchenozzels[4] to demonstrate that his purposes in redemption are not contingent upon our frailties. He will win. He will tell a story that ends with justice, beauty, and glory…and it will not be subverted by the bokeness of his friends or enemies (who are often morally indistinguishable).[5]

2) If God can use someone as paradoxically cowardly and courageous as Abraham, or someone as deceitful and industrious as Jacob, or someone as vengeful and prudent as Joseph, for his cosmic narrative of species redemption…then he can use me for the small, localized tasks of redemption he has asked me to be involved in. I am precisely the kind of person God likes to use. And so are you. Being an agent of redemption really is something ‘just anyone’ can do. You do not need to be anything special. 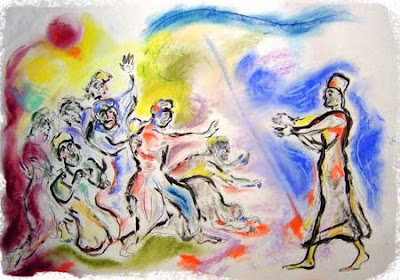 Which brings me to the confrontation between Judah and Joseph in Genesis 44[6], a text I have read dozens of times, but never seen. Now stories that include both Joseph and Judah are interesting because these two men become the two great provinces of the Hebrew Nation:[7] the Northern and Southern kingdoms. Following the Assyrian exile, ‘Judah’ is often shorthand for ‘the people of Israel.’ But that’s weird, because Judah was an enormous a-hole. So it is interesting how this relationship between these two most important sons of Jacob plays out. There are four stories that include these two brothers that becomes an underlying narrative, itself.

Joseph and Judah: The Story within the Story (in Four Acts)

Act 1: The Sale of Joseph

Joseph was the bratty little son of his Father’s favorite wife.[8] And so his brothers decided to kill him. Except one brother, Judah, decides, “why just kill him, when we could profit from this.” So he talks them into selling the boy into slavery and staging his death. 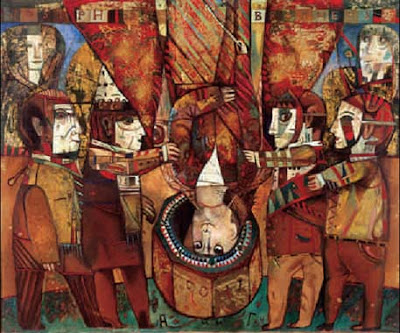 The next story we get about Judah placed awkwardly within the story of Joseph’s rise and fall and rise and fall and rise in Egypt. It is a tawdry little tale of Judah’s mistreatment of his daughter in law that ends in her deceiving him into sleeping with her and then publically outing him to extort him into honorable treatment.[9] The placement of the story of Judah’s sexual brokenness seems curious until it is considered as a contrast with Joseph’s sexual integrity in the following passage. [10] 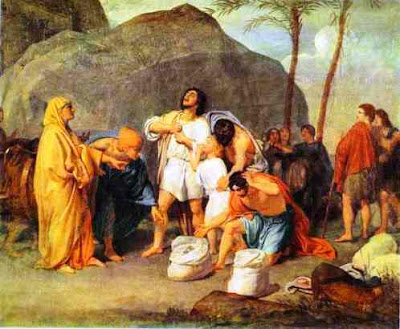 Fast forward decades. Joseph is running Egypt, which, because of his ‘insider information with Yahweh’ is the only land that has food in a regional famine. His brothers come to get food and don’t recognize him. What follows is three chapters of mind games as Joseph toys with his brothers. Commentators do all kinds of exegetical gymnastics to explain Joseph’s behavior[11] but I think the parsimonious solution is that Joseph is being a d-bag. He is an emotional mess seeing his brothers (he has to leave the room to cry not once, but twice[12]) and he reacts with an illogical string of actions that seem motivated by a messy mixture of affection and vengeance…but mostly vengeance. The story comes to the head with Joseph threatening to kidnap Benjamin (his only full brother, and his father’s new favorite)…when Judah stands up to him and offers himself instead. In response to this gesture, Joseph breaks down, reveals himself and is reconciled to his brothers.

Before Jacob dies he prophecies over his twelve sons. Joseph and Judah both get honorable treatment but it is clear that the trajectory of God’s rescue operation, his plan of cosmic redemption, will go through Judah’s family…even though Joseph is generally thought of as the most important son. In fact, when we talk about the patriarchs, it is Abraham, Isaac, Jacob and Joseph…but this is wrong, the Davidic line goes through Judah…and TAMAR!! Both Matthew and Luke highlight Perez[13] (one of Tamar’s twins by her father in law, Judah) as part of Jesus’ lineage. But more than that, Matthew even mentions Tamar by name in the genealogy, making her the only woman included in the lineage, though she would seem to be the one he would want to forget. I think Matthew is pointing out how his lineage is messianically legit, but messy…making it existentially legit.

Volf, Vengeance and the Role of Self Donation in Reconciliation

Which brings me to Miroslov Volf and the role of self donation in reconciliation. In Exclusion and Embrace Volf deals with the problem[14] that we generally privilege the oppressed morally over the oppressors.[15] And, while nothing seems more unseemly than to morally implicate the oppressed[16], he argues that one of the great violences that oppression does to the oppressed is to force violence into their hearts. The oppressor not only takes their resources and/or dignity, they create the desire for vengeance in the hearts of their victims. So the greatest wickedness the oppressor does is to create wickedness, a network of sleeper cells of future oppressors. This is why history is replete with accounts of power shifts, where the oppressed easily slips into the role of oppressor. The evil of the oppressor is complete. They have fashioned the oppressed in their own image. 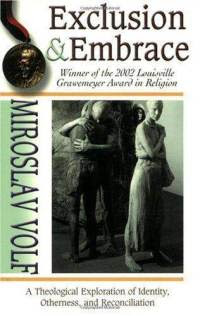 And this is what has happened with Joseph. His brothers’ evil against him has made him into them.[17] But Judah has become someone different in the decades since Act 2. There is actually a note of who he had the potential to become at the end of the tawdry episode with Tamar. When she publically embarrasses him, his response was simply: “She is in the right, not me.”[18]

These men did not invent their own brokenness. Their parents had their own soap opera. And the gist of it is that everyone resented the children of the favorite wife (Joseph and Benjamin).[19] But here is Judah, the very one who sold Joseph into slavery, offering himself into slavery in exchange for Benjamin not in spite of him being Rachel’s son but BECAUSE Benjamin is the only remaining son of his father’s favorite wife. This does not justify Jacob’s favoritism, but it shows that Judah cares more about his father (who would die in sorrow if he lost both of Rachel’s sons) than he does about his father’s mistakes.

Volf argues that the cross is the key to reconciliation. That self donation is the only way to break the cycle of violence. And that is what we see in this story. Judah makes Joseph in his own image by selling him into slavery. But then he unmakes that image by offering himself on behalf of the brother he should hate. And so Joseph[20] and Judah become synonymous with Israel. But it is Judah[21], not Joseph, who becomes the conduit of the covenant. And this seems surprisingly apt. Because we know the climax of the story. It is God’s self donation which redeems and disarms his enemies and makes the way for our reconciliation.

After digesting this for a few days, it not only sits well with me, but makes tons of sense. Great insights as always, Stanford.

You're totally right about Joseph's behavior being commonly construed as morally justified. I think that that's a hurdle you'll face in explaining the idea to heavily churched listeners. But you clearly realize that, acknowledging the "exegetical gymnastics" that occur.

Great post! On the Judah and Tamar story, I was inspired to post an old paper of mine here about the near-identity in story structure of the Judah/Tamar and Saul/David narratives.
For Joseph's antics, one of the most intriguing suggestions I've seen actually comes from our kids' childrens' bible which explains it in terms of Joseph wanting to see whether his brothers were any different now - how would they treat the youngest brother, the same or different than Joseph? I'm not sure that's incompatible with your interpretation but it does jive somewhat well with Genesis's portrayal of Joseph as a kind of wisdom figure (which isn't to say that it is portraying him as perfect - he uses his wisdom, like Solomon, for some subjugatin' and this could be another messy example of the same).
One correction on the tribes thing: It would be more accurate to say that Judah and Benjamin (plus maybe Simeon, but they seem to have been quickly dissolved in Judah fairly early on in the biblical narrative) are the tribes under the southern kingdom, Judah, and all the other tribes went to the northern kingdom (not that the Joseph tribes got the north and that all the others went with the southern kingdom). The northern kingdom's usual designation is simply "Israel". It does get called "Ephraim" (not "Ephrium" :) )a few times since Ephraim was the dominant tribe, though not the largest (the capital, Samaria, was located there and hence Ephraim was politically dominant). Ephraim and Mannasseh were the two Joseph tribes descended from his two sons of the same names (the former being the younger, following God's pattern elsewhere). Asher, Gad, Naphtali, Dan, Zebulun, Reuben and Issachar were the other tribes that composed the northern kingdom, Israel. (that adds up to nine tribes, but the biblical writers sometimes say "ten" since they ignore Simeon because of its relative non-existence at that point and Judah and Benjamin make two tribes and hence 12-2=10 - which is just a way of saying, "all the other tribes").

Oh, and don't forget Rahab, Ruth, and Bathsheba in Matthew's lineage for Jesus too!

Thanks, friends. I really appreciate the input.